Day off and plan for the last couple days in Chamonix 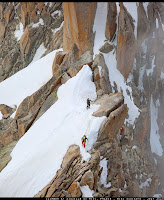 Update: we're postponing the climb because of br's swollen knee :(

we are getting ready to head back to Le tour.  This time we are trying to climb Tete Blanche and Petite Fourche ( they're right next to each other so maybe a two-fer ). 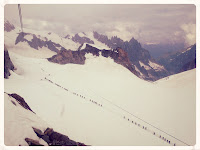 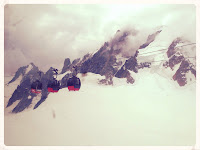 The last couple days ( since Mont Blanc) were pretty mellow. We didn't do jackshit the day after. slept in till 11 am but i reckon we deserved that. Did laundry and met up with my friend who came all the way from Bandol , France. He worked with me at Weta before he decided to be free :D 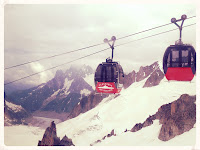 The next day we took the cable car up to Aiguille du Midi. It went all the way up to the summit which is pretty awesome. But it was crowded, and the trip was tainted by us getting upset on a bunch of old people who kept cutting in line. They giggled while cutting in line and totally ignored other people who yelled at them. My friend tried to talk to them calmly but they just giggling and completely ignored him.. That's new for me.
We brushed it off and tried to enjoy the view anyway. Originally we wanted to continue taking the italian side cable car all the way down to courmayeur .But it was in construction so BOO. we only went all the way to Point Helbronner ( italian side) and returned to du Midi. 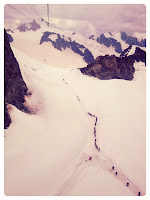 Lots of climber on that area. At one point we saw a line of maybe 30 climbers going up . It looks like they're in special force ( wearing military uniform) . Such an odd view.Super pretty up there thou .
Then we hiked up to glacier d'argentiere starting from the town Les Chosalets. After 1,5 hrs, the trail met up with petit Balcon Nord trail , We followed it and headed toward Point de vue trail to get close to the icefall.
The view was impressive since we got really close to the icefall.

Anyway, this climb might be the last one before we're heading out to grindelwald. Before we know it there's only 9 more days on this trip . Bummer.
I don't think both of us want it to end.