Mt.Hood - Back before lunch time

that's my kind of climbing :D

well i've never really done it before Hood but i can get used to that. Although that means we started super early .

We gave our self couple days of rest days. Physically at least.. For some reason on this trip, accommodation issues has been a debacle. This time, the rental place I booked thru vacasa.com got fucked up. Why? because a moron there screwed up the dates. Now.. as if finding a pet friendly place was hard enough and i understand mistakes happened. They blamed it on me and said that I said the wrong date and they had it in recording. I demanded to hear the recording after multiple phone call from them trying to convince me that it was my mistakes.. and after going back and forward, they said that they mistakenly listening to another recording and I DID say the right date.
Not only they made a mistakes, they lied, tried to manipulate me and did not want to take any responsibility. There were more lies thru out the phone calls that just got worse and we are still dealing with it .

ANYWAY,  this super nice lady at hrvacations.com let us stay at this rad house up on the hill with hot tub and gave us big of discounts. I was in awe. Hood river is pretty and nice little town. Me and Br actually love it here. 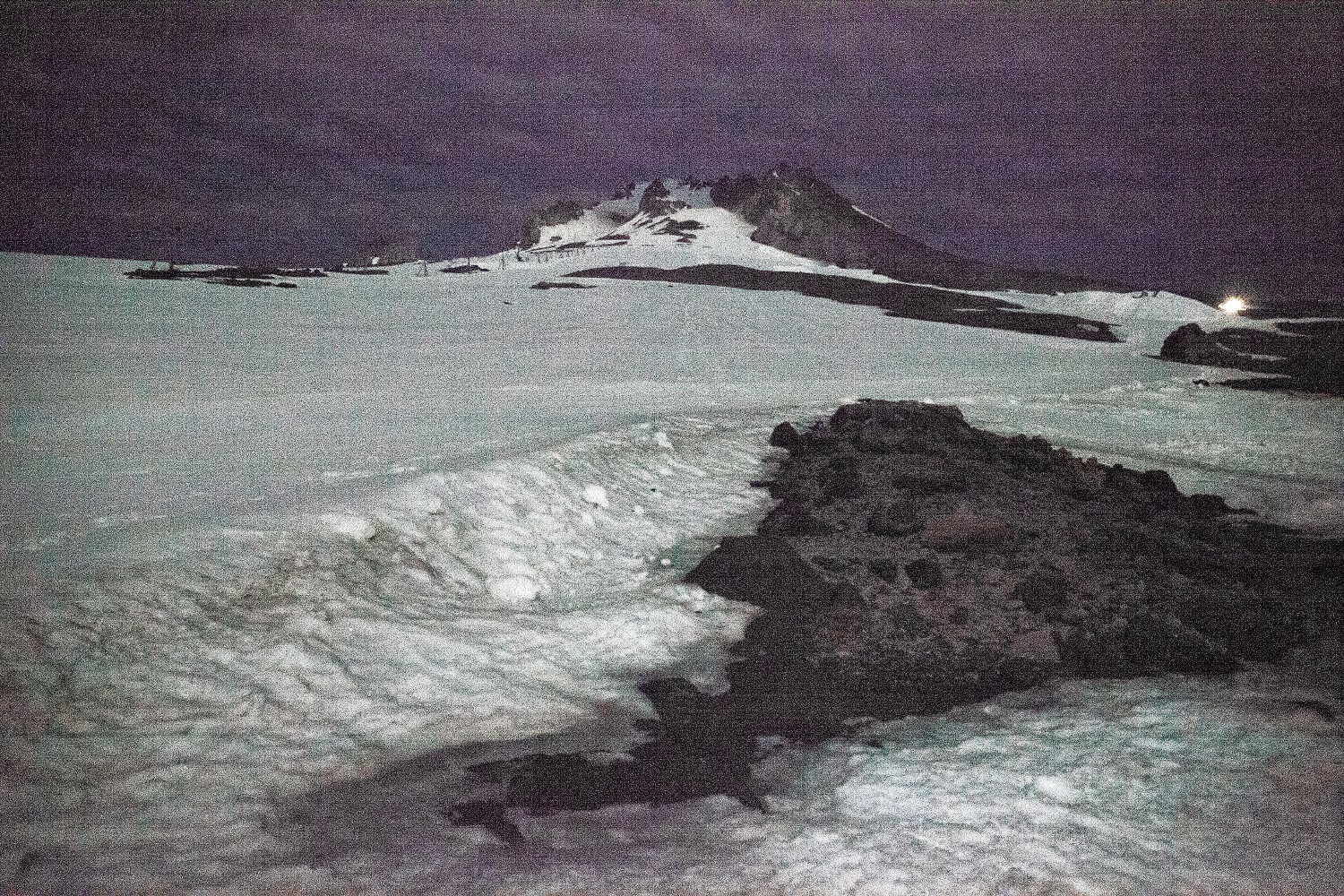 So the climb... we woke up at 10.30pm ( after only sleeping for couple hours  :| ) Left home about 11pm to drive to Timberline lodge where the trailhead is. ( the hotel is also where they shoot the exterior of the shining) 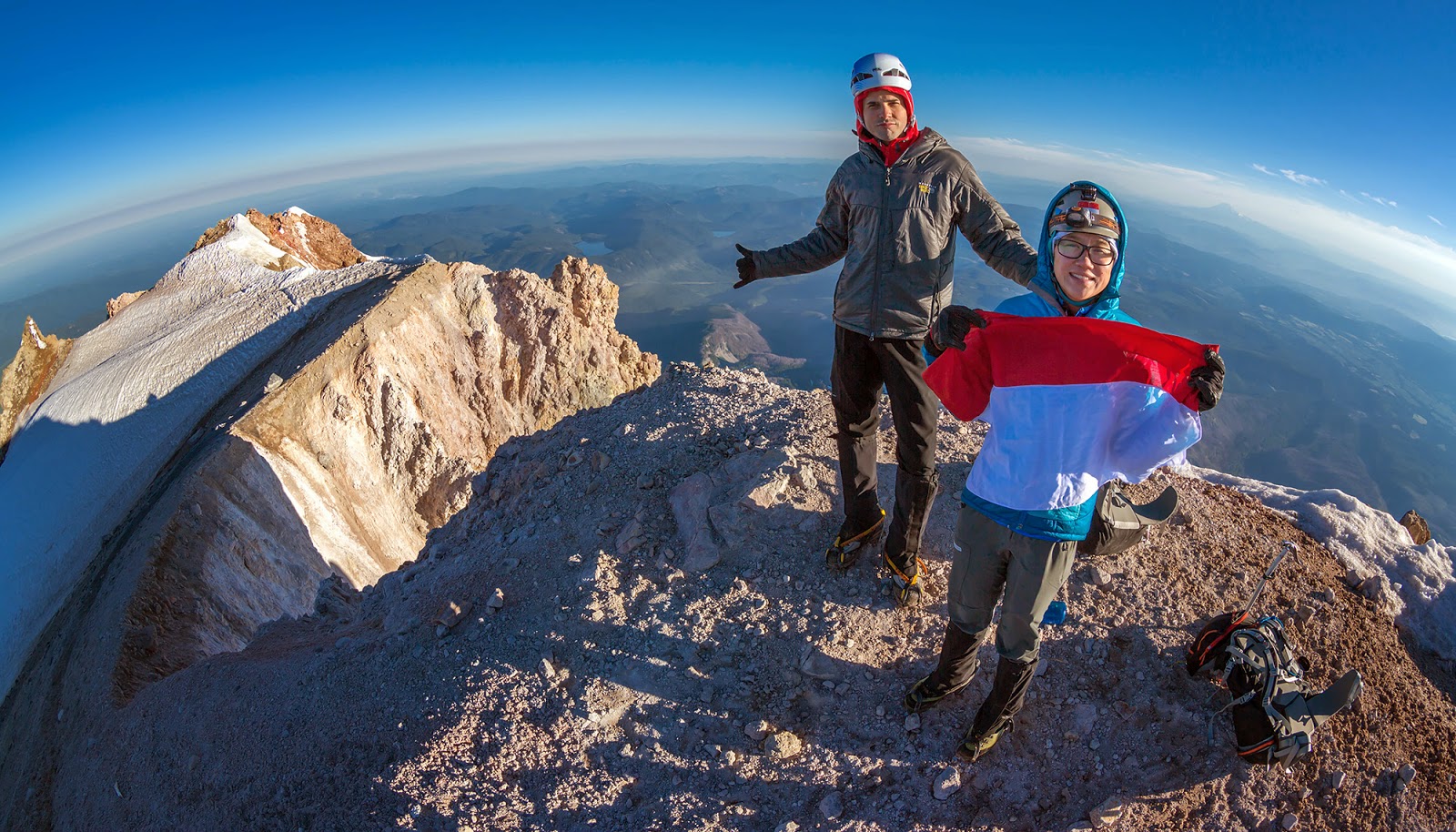 We started climbing by 12.30am.. It was full moon. Actually, it was supermoon. It was rad... We made good time up the mountain. The first part was weird thou... The lower part of the mountain is occupied by ski runs.. Snow Cat was running early to groomed the trail . We hiked next to them and navigate around the ski run. It was just surreal to climb in that environment. Then we got above the ski lift and things started to feel "usual" again. Except the sulfur smell that made us cringed.
The famous hogsback.. we navigated around some open crevasses bridges that looked very intimidating. Up on the saddle of the hogsback, the smell got worse, there were steam coming out of the yellowish rocks. We stopped just enough to see where we suppose to go next.
The option was to up the hogsback saddle and traverse underneath this big bergschrund OR traverse to the left and up the Old Chute route.
We opted for the later.
It was steep but the previous team foot step had made our travel easier. Br told me to look back over the sunrise and I saw this amazing shadow of the mountain .
Then the summit ridge...Usually there were lots of snow up on the ridge but this time , it was exposed.. another snail focused steps for me
.. After snapping pictures at the summit, we head down. The snow at the chute was slushy and more prone for rock fall. I went down as fast as I can ( which was not fast ) and got out of that area. Long break at the Hogsback's saddle and chatted with other team that just came up .
Back at the car by 10am. Starving but it felt awesome to finish that early so we can picked up the dog and got pizza and beer for lunch and rest!
Bliss...