after spending time with kali ( and found out that her teeth was crooked coz she bit thru something :( )
Decided to drive north to Palmerston North… 45 min later.. went straight to the information center.. to figure out where i was gonna stay that night.. 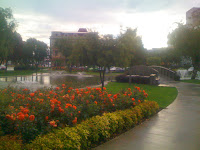 got some lunch.. and went to a mall to get some towel… first mall i've ever visited here in new zealand ( been here for 5 months now).. i found it to be impressive. 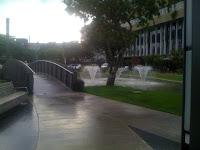 note to self:
make sure camera battery is actually inside the camera…. not stuck in the charger back at the hotel!!!!!
well , iphone camera it is …
it started raining when i was walking around looking for internet.. failed..
so i went back to the hotel and found out that the wind farm is only 15 min away..
off i went..

well the problem was… the receptionist forgot to tell me that there are TWO wind farm lookout.. So there i was.. standing at a "viewing platform" looking at a sport field….. "well that's not what i was hoping for"

So i  kept driving…
another highlight of the day:  waited for a possum to cross the street..
now if only i got a pics of that

it was good thing i decided to sleep in.. although i was still out the door by 7am instead of 5.30..

the wind farm didn't open till 8am.. So even after all the wrong turn ( about 10km of them )
detour to a river.. and taking pictures of cows ( i found out  that they like to stare... creepy..)
I still had couple minutes to spare..
the view from that viewing platform are pretty nice.. lots of wind turbine.. and green hills.. no one's there.. and no cars around.. except one asshole that thinks that racing thru the hill taking both lanes was a good idea .

stopped at Shannon.. sit by the window.. reading newspaper.. taking my sweet ass time to eat my breakfast was nice..
one thought cross my mind.. that i have been travelling alone most of the time since i moved here.. and honestly i don't mind it at all ... freedom.. not having to feel bad.. i can do what i want.. go where i want.. change plans as i please.. spend as little as i want..

and just taking everything around me in ..
then i visited kali again .. well .. i would rather travel with her.. coz i know she won't complain..
she'll just stare and wiggle her butt. :)