What a week ! I've been to Chamonix twice for climbing but for this week , the town completely transformed itself into trail running festival kinda town. I've heard about the energy around UTMB races but being here to experience it myself is something else and it would be the ones that i would remember for awhile. The race was hard, and i knew that heading into it. But it still surpassed my best expectation on how it would be.  It is a 100km / 20200 ft elevation gain thru Italy, Switzerland, France kind of race after all.
The race started with a perfect temperature in the italian side and started raining when I entered switzerland ( champex lac) and stayed raining until the morning. But I somehow avoided any injuries despite of couple falls on the mud and rocks due to rain. After months of training, I finally got a chance to run the course I heard to much about. The town was buzzling with people and runners coming in from previous races all night, so I know that sleep wasn't really in the book leading up to my race. After 4 hours of sleep, kim and I was at the bus leaving for courmayeur by 6 am. By 8 am I was all lining up at the start line. They somehow mistakenly putting me in the first wave that was very daunting to see all the fast runners. 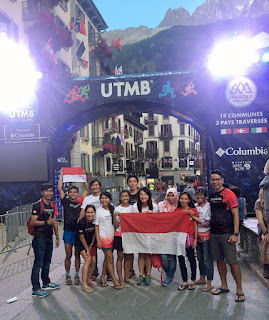 The race started at 9 am and as usual everyone started fast and as usual i got dragged in to the faster pace. I slowed down a bit but didn't want to get too far behind to get stuck in the bottle neck coming up before the big climb.
The climb to tete de la tronche was long but was gorgeous and then I saw kim at Bertone at 3 hrs mark. She had hike up from Courmayeur to see me. I told her that I've been feeling nauseous ( I got cold before the race ) and asked if she can find me some ginger chew. Which she did !! When i saw her again at Arnouvaz after a pleasant traverse, i literally stuff my face with them and it somewhat helped. Then off to the next climb to Grand col Ferret where it started to get cold and wet .. and it started hailing. From there the trail kinda mellowed out which probably the only mellow part of this race. And i knew that because I somehow managed to stayed ahead of my "Plan A target that I most likely won't reach " time by 20 minutes. Kim who got stuck in traffic getting to the aid station meet me 5-10 minutes after i got there. I probably spent way too much time here but i welcomed a clean dry shoes. Besides, i took me a good couple minutes to take off my socks without cramping! I stayed about 3hrs ahead of the cut off time and on target still. But I knee that I would slow down on the next 3 climbs ahead.
Brandon had made a video with some of my awesome friends giving me encouragement. Watching them at the aid station was one of the highlight of this race. Never underestimate the support of your love ones! 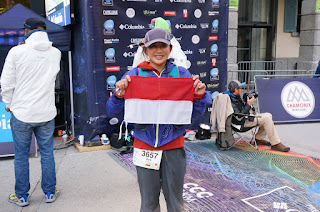 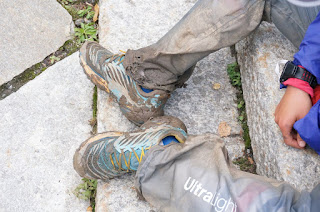 It was dark and still raining but temperature wasn't horrendous. I wore all 3 of my layers, waterproof pants and glove, quite pleasant to run in them when it was cold out.
By this time the trail was so muddy , people were sliding left and right .
I saw kim again in Trient where she swapped my water with Tailwind Nutrition green tea. I had been drinking CarboPro for half of the race now and I needed some caffein since it was around midnight now. Tips for next races, mixed onigiri and soup is the bomb for aid station food at night time. Thanks Adiguna Wingky for the onigiri tips. 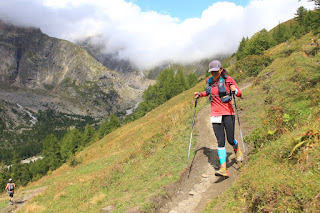 By Vallorcine , i was off by 2 hours from my target and the nauseous feeling came back. Brandon told me over text to just let it happened and then refill with food. I threw up with nothing came out but felt instantly better. I ate a little bit and ready to finish this race! 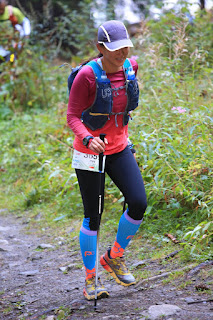 I probably could've pushed harder on these 2 climbs but i wanted to save a little bit for the last big climb at miles 51/ 83 km . The organizer had decided to change this part of the course because of the storm so instead of going to tete aux vents. We went half way up but here's the twist , Instead of tete aux vents we had to drop down almost to argentiere then went back up to flegere. It was pretty mean twist when you had been running for 20 hrs. I started to push my pace a little bit and passing people on the way up to flegere at miles 59 / km 94. 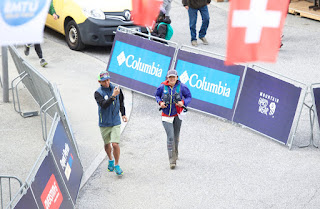 I stoped just enough to get some candy out and started running down. I was determine to push this part and not getting passed by people on this downhill section which is my weakness. Fortunately this part is similar to the run i've practice back in socal.
Then it was the pavement . 1 km to go . I was 2 hours behind my plan A but 3 hrs ahead of cutoff. At this point, i wanted to go under 24hrs. But with 4 min to spare, I didn't think i could make it so i slowed down a bit to avoid the chance of throwing up. 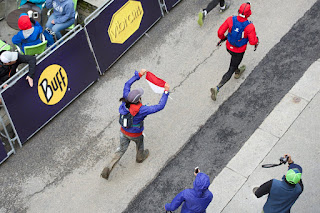 Back in town, Couple people from Indonesian team met me on the last couple hundred feet and run with me and crossed the finish line at 24:01 hrs. 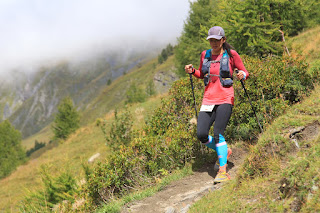 Well that's all folk . It has been a crazy training round this year and I've been pretty anti social but no worries! now we can go back to do all the normal stuff people do.. Or NOT. 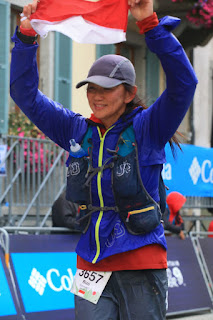 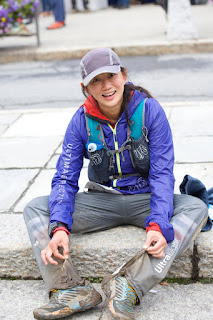 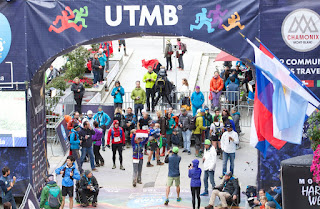 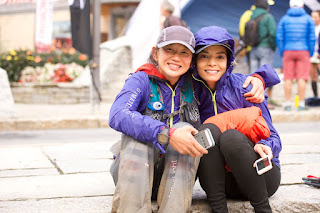 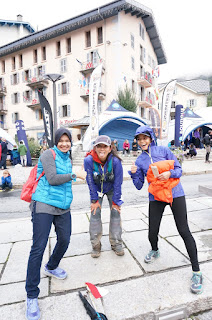