That was my thought for the last 10 minutes after circling around the "summit", trying to find the actual point.


The problem with mountain in North Island is that it's often only a part of a trail ( it's not an actual peak) and because it's mostly relatively short ( lower than 1300m), it's often covered with bushes... Makes it REALLY hard to find the exact point.. 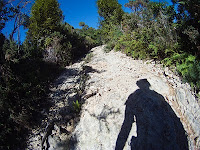 Before I got to that point ( where i was swearing and being confused ).. 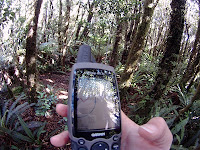 Back in the main trail... My GPS showed that i was already over the highest point.. so i thought.. fuck it .. i'm gonna go thru this bushes all the way to the top .. so there I was.. navigating through thick bushes( with kali's disapproval look) .. My only clue of where the top is the little triangle that's showing in my reliable garmin 60csx.. that once again proves to be a must have in NZ's bush...

Once that marker crossed that little triangle . i called it a day.. I'm still not sure if that's the actual point.. but at that moment.. I don't think it's worth to battle it.. and I can see Kali's happy to get out of the bushes that was higher than her body..

Off we went.. tried to find our way down ( hoping to meet up with the main trail at some point... ), but the bush just got thicker and harder to navigate.. a LOT of URRGGHH.. hmmmm... fuck.... ARRGGGHH at this point..
I felt sorry for all the spider web that i had to break during this trips... 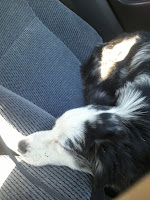 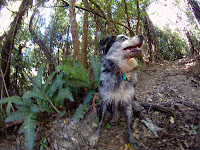 eventually I found the main trail ..me and kali started our 2 hours speed walk back to the car..
With her crashing on the drive back to Wellington, We ended the trip in smile..